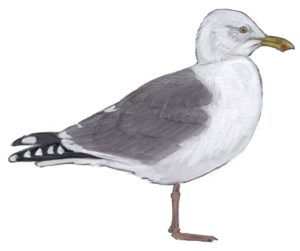 Gull identification has always given me trouble. Not only are the species similar but the plumage changes dramatically over the first few years of life. Some species, such as the large Western Gull take four years to develop. In its first year, the gull has mottled brown feathers (think of play clothes). As the bird gets older, subsequent molts show more and more of the gray and white of the adult plumage. Other species take three years to grow to maturity, and the Bonaparte’s Gull only two years. This gives you a diversity of plumages that often get me scratching my head. That is why I made this handy identification guide. All the plumages of the common west coast gulls are shown side by side with detailed notes calling out subtle differences. Print this guide in color and stick it in the back of your journal and you will become a gull ID Jedi. Download the Gull Guide (PDF).

One word of gull caution. The subtle distinctions between species sometimes do not even matter to the gulls themselves. Some species successfully mate with each other producing hybrids and then re cross with other hybrids or pure species gulls. A Western Gull that mates with a Glaucous-winged Gull would have characteristics of both species and a back color somewhere between the two extremes. If this 50/50 bird were to mate with another Glaucous-winged Gull, its mantle (back color) would be somewhere between the 50/50 and the pale Glaucous-winged. Thus you can, with subsequent crosses, get a continuous range of mantle colors. When you are in doubt, you may have found a hybrid. This is another reason to have a little humility in the face of gull identification.