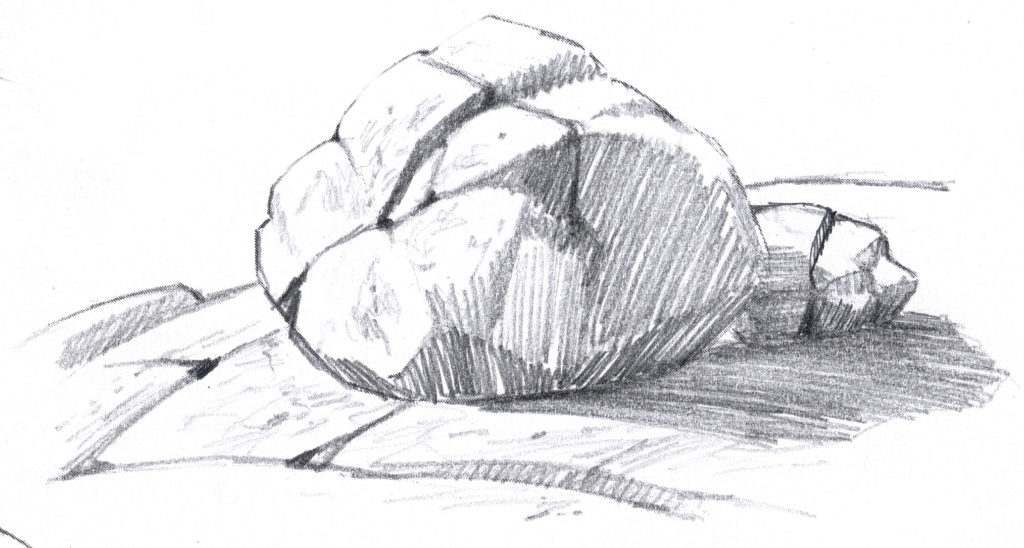 Rocks are common elements in almost every landscape. On a big scale they are mountains, on a small-scale they are the boulders or stones in a field. Getting comfortable with depicting rocks that show planes and structure will help many of your drawings. Here are the key points for success. 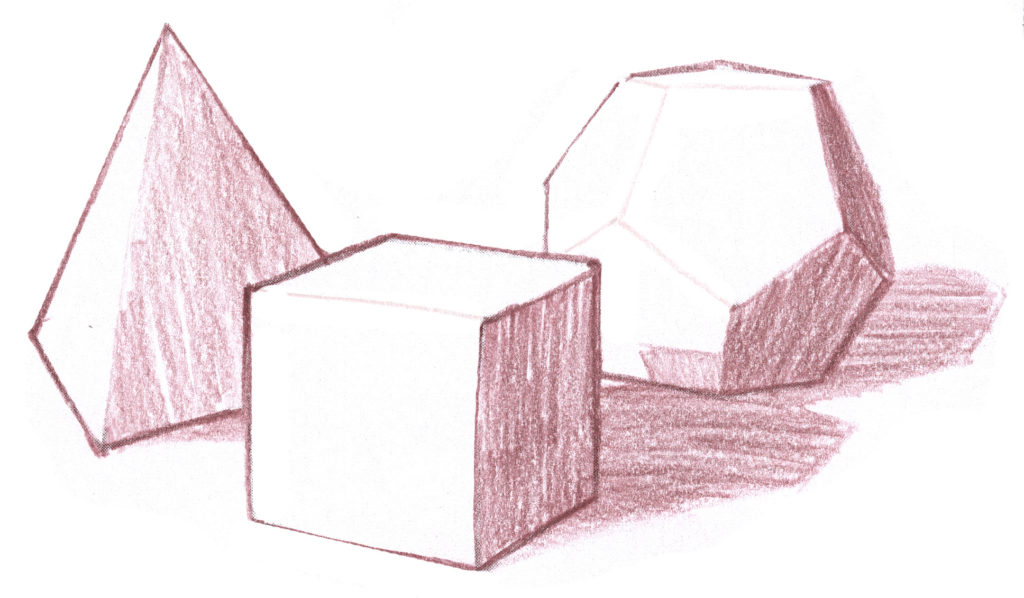 Planes are the angled surfaces of a rock. If you want your rock to have real volume, you need to see and show these planes. One way of showing the planes is with a line on the edges between the planes. This can be unsatisfactory because there really are not lines there. Another way to show the planes is with shadow. The line between light and shadow will fall at the edge of two planes so showing this  shadow defines some of the planes of your rock. If a cast shadow falls across two planes, it will change its angle as it does. 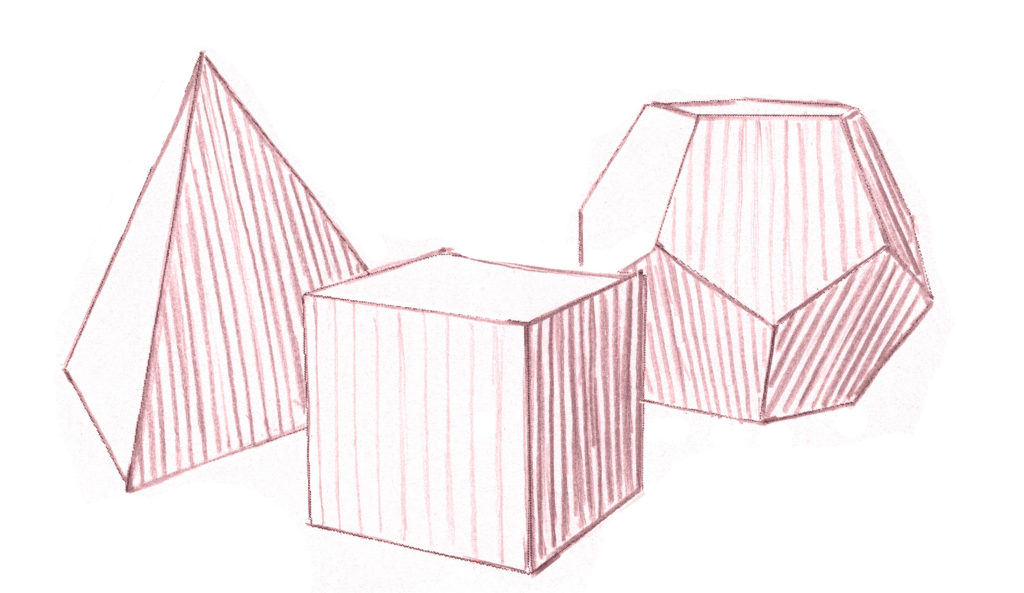 You can also indicate the direction of a plane by the orientation of the shading lines across it. If your shading lines show up in your final drawing (instead of being blended together), you can use this to your advantage. Orient your shading lines such that they show the path that a raindrop on the rock would take across the surface (down) and horizontal for a flat surface. If the plane is not facing straight toward the viewer, down will not be vertical but at an angle. It can be difficult to visualize how this works at first. A 3D model inscribed with vertical lines will help you visualize these angles. Download and print out the dodecahedron model and assemble it. Observe how the downward oriented lines change angles as you rotate the model. I put mine on the back of the toilet tank and looked at it daily for a week until the angles became intuitive. Give it a try. 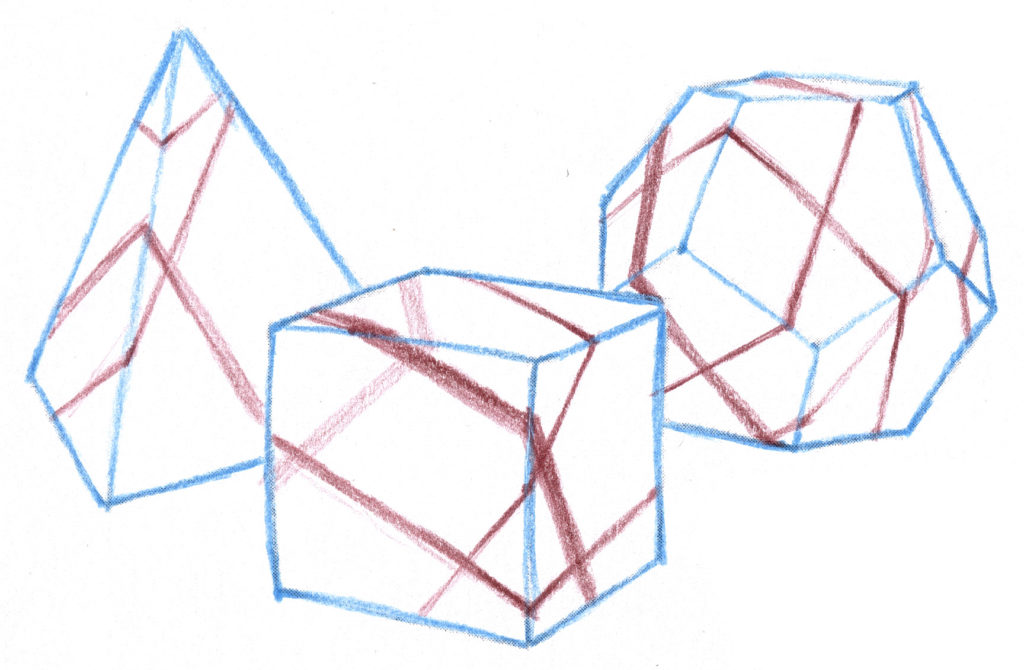 Cracks and veins also help show the planes. The cracks change direction every time they pass onto another plane. Look for cracks in your rock. Make sure they change angles along with your shadows and shading lines.

Now lets take a look at a step by step drawing that incorporates these concepts and others to give the illusion of an angular rock, emphasizing the planes and solidity. 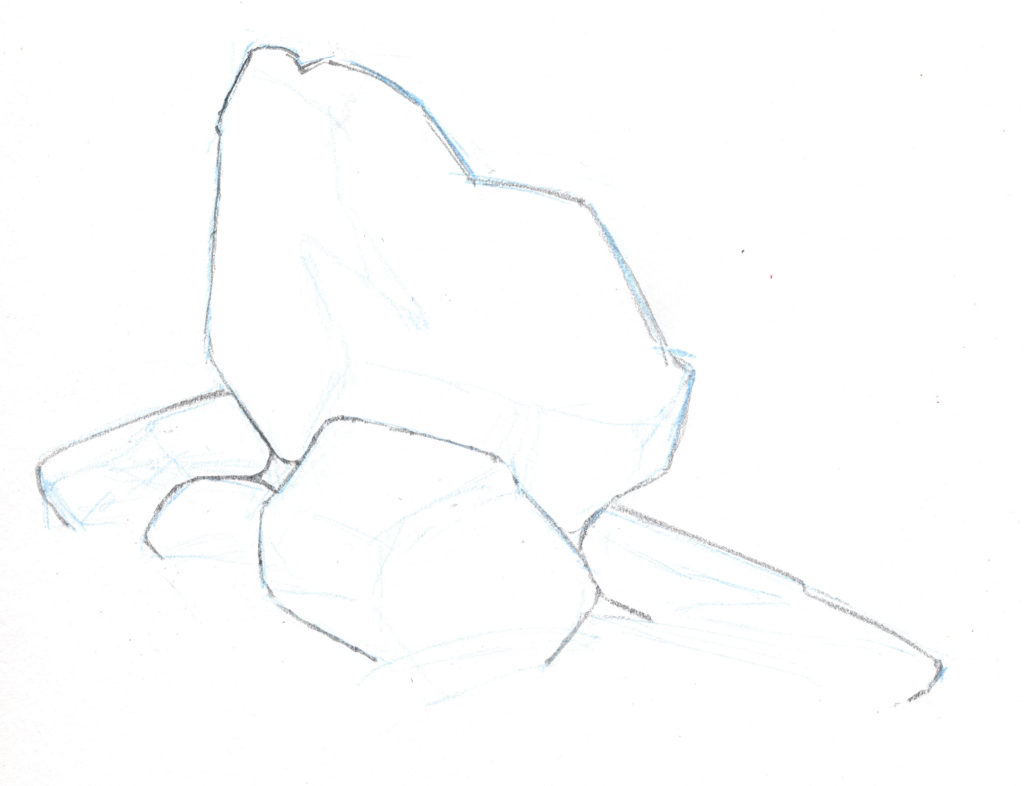 Draw the outlines of your rocks. I started with a pale non-photo blue pencil to block in the basic shapes. If you look closely you can see it in the background. I also indicated the edges of the major shadows and planes. 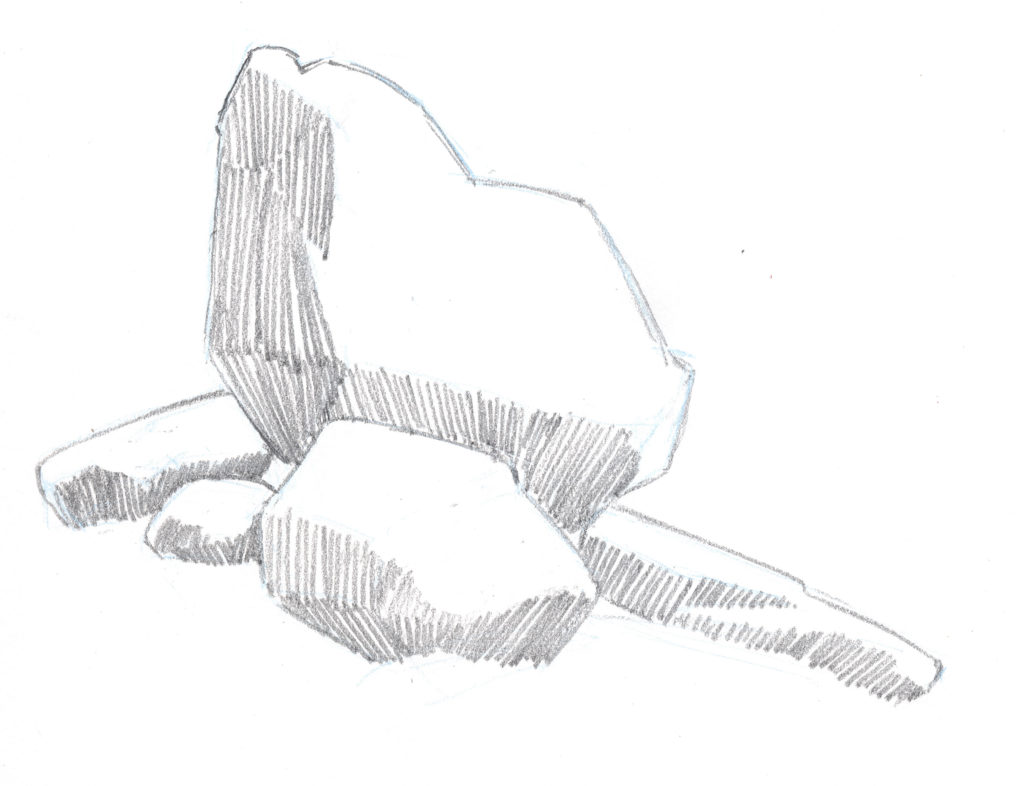 Next I drew the major shadows using lines to carve the planes of the rocks. For the purposes of this demonstration, I am making the  shading lines fairly bold. I usually would handle it a little more subtly. This is a little too prision bar stripey for my taste- a jailhouse rock? 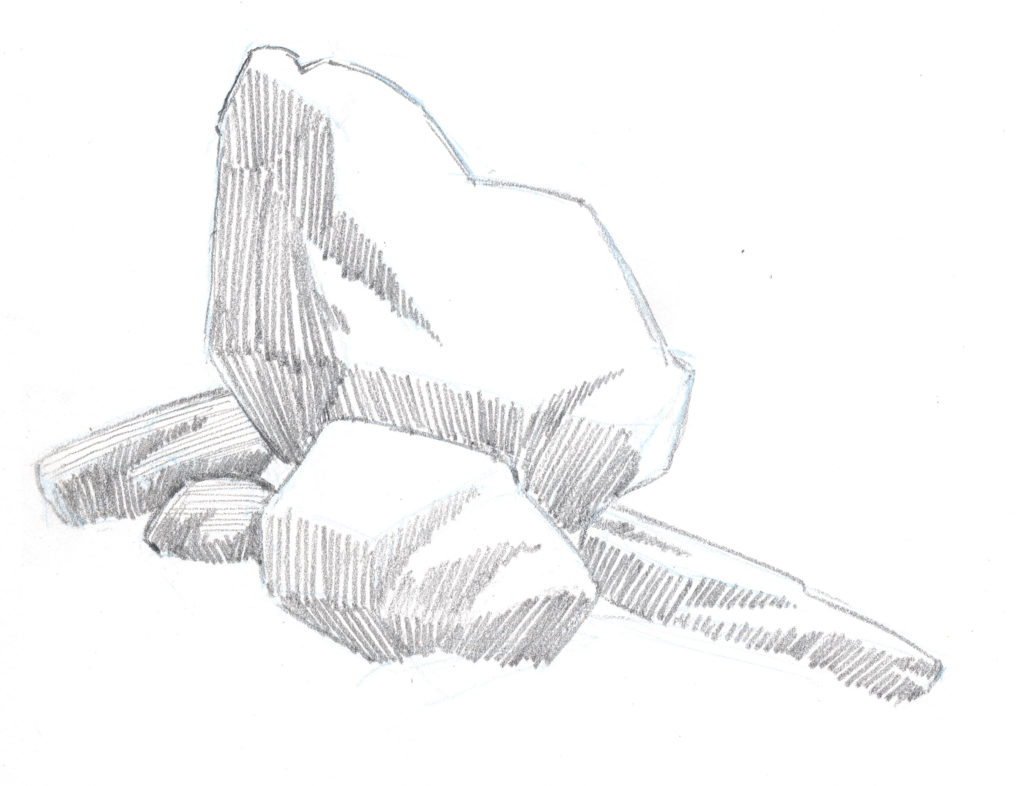 Now the dark and light wedges… Look along the edges of the shadows on (many) real rocks and you will see places where wedges of shadow intrude into the highlight and wedges of light creek into the dark. Add these to your shadow edge and the shape of the rock becomes much more interesting. 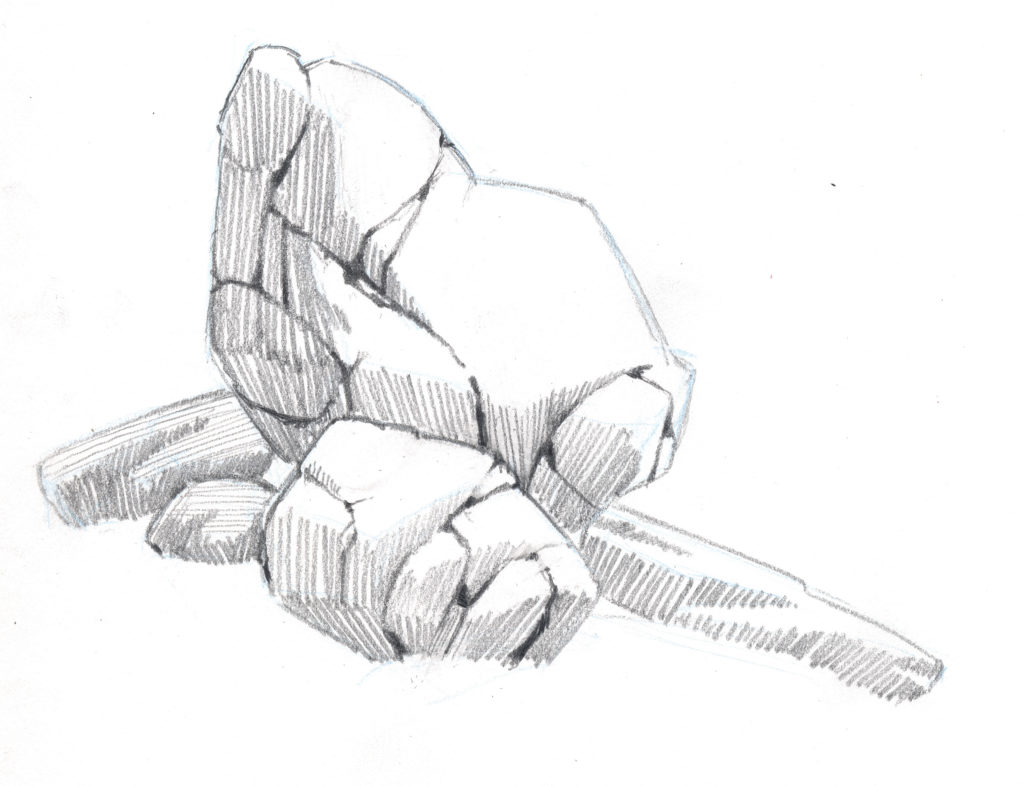 Now the fun part- cracks. If your boulder does not have cracks, just say no to crack. But if you are lucky enough to be drawing a rock that has been fractured, the cracks will dramatically help you show the planes of your rock. The angle of the crack should change each time it moves from one plane to another.

You will notice dark divots in some of the places where two cracks meet. These accents, called snodgrassing by illustrators, give a lot of depth to the rocks. They are easy to make. fill in the tip of the narrowest section of rock with graphite. This small tip is more vulnerable to erosion, making it recede more quickly than the rest of the rock. 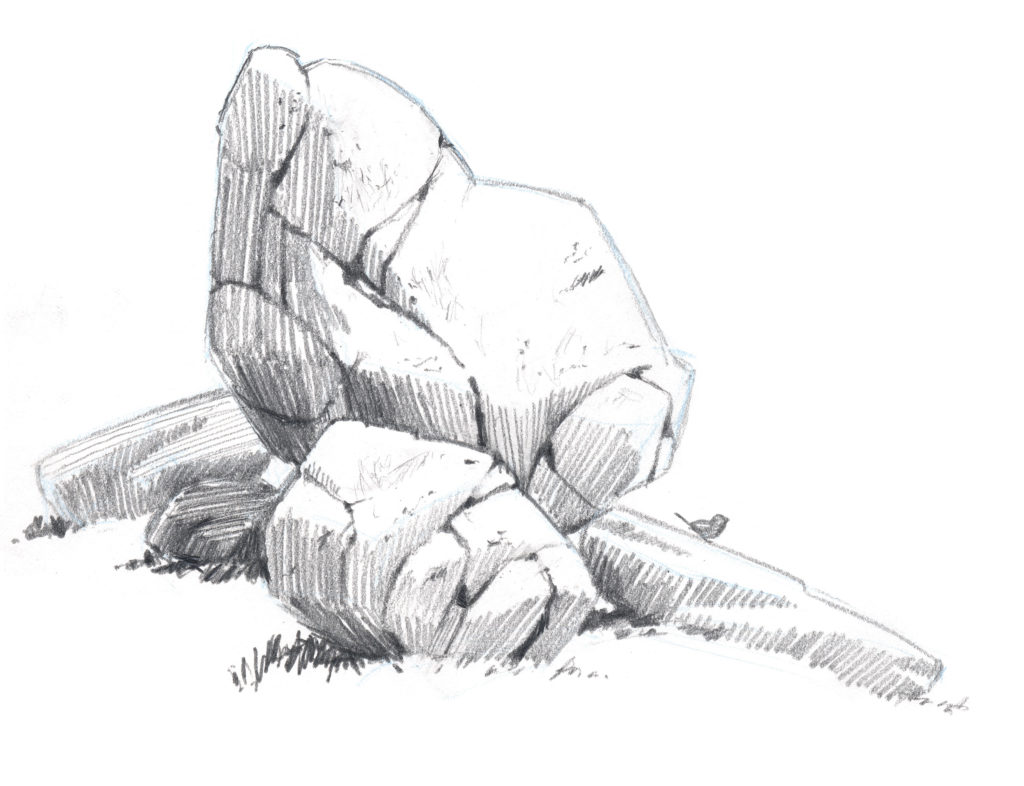 In this last step I have modified three things. First I have added a little bit of texture to the rock, especially in those areas where the shadow moves to highlight. In this region, light glances across the face of the rock, emphasizing the texture. In the middle of the highlight areas, the texture gets washed out by direct light. To suggest the texture, I make a combination of little scratches and dots. Second, I have deepened the shadows on the left side of the rocks to suggest stronger sunlight. Last, I add shadows at the bases of the rocks to ground the rocks to the earth and give them weight. Note that the texture in the shadow suggests short grass.

In this drawing, I use a limited number of value (dark to light) steps. My poor brain can not keep track of a million shades of gray. I usually can handle about four. Rather than worrying about blending subtle shades of gray, I concentrate on using my small palette of grays carefully, making subtle value shifts as I move from one plane to another and carefully carving the shapes make by highlight and shadow.

Start observing rocks around you. Try your hand at simple studies to carve the planes and give your rocks volume. The best way to learn how to draw rocks is to practice with real rocks you find around you. Also learn a little about geology and the history of the rocks you draw. They will become even more wonderful to you. 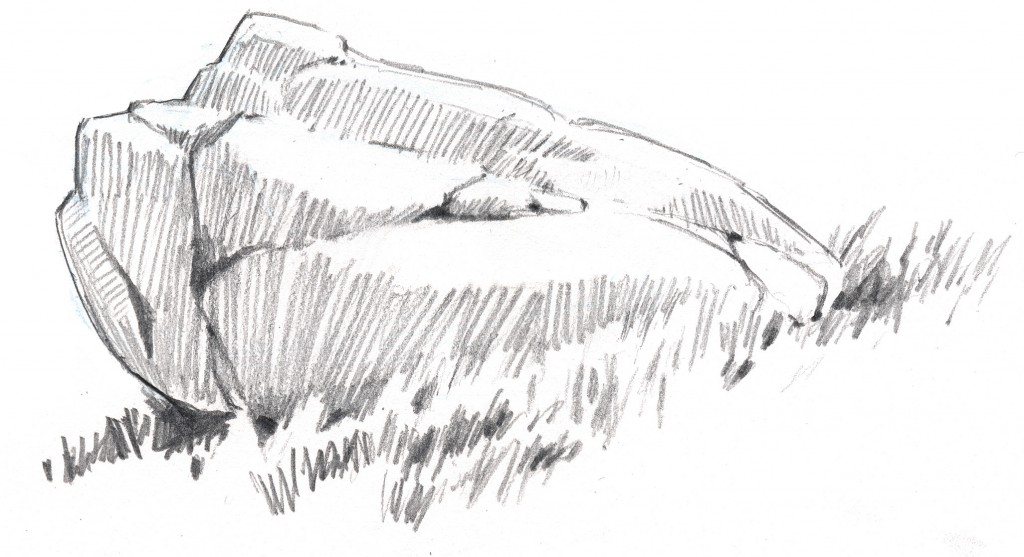 Donate to Support My Work

Login to Your Account
Manage Cookie Consent
To provide the best experiences, we use technologies like cookies to store and/or access device information. Consenting to these technologies will allow us to process data such as browsing behavior or unique IDs on this site. Not consenting or withdrawing consent, may adversely affect certain features and functions.
Manage options Manage services Manage vendors Read more about these purposes
View preferences
{title} {title} {title}
Loading Comments...