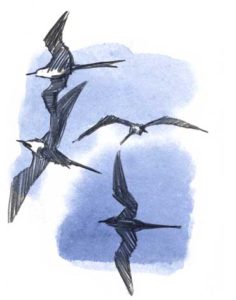 On a trip to Kaua’i I visited the Kilauea Point National Wildlife Refuge. The air and cliffs were filled with boobies, albatross and frigate birds. It was stirring to see such abundance of seabirds. I had a great opportunity to observe the structure of the bird’s wings as I sketched the birds flying in and out of nest sites. The birds were cooperative subjects to draw. As they wheeled about, I saw the same in flight positions again and again. There is a special detail of wing anatomy that you need to know to successfully draw these birds.

Many seabirds have long, narrow wings that allow them to soar for long periods without needing to flap. In some species, the familiar wing units, primary feathers (attached to the “hand”) and secondary feathers (attached to the forearm) are simply lengthened as in the tern wing to the left. However, albatross, pelicans, boobies, gannets and other seabirds with exceptionally long wings have an additional unit of feathers called humerals that are attached to the humerus (upper arm). This gives the wings an extra kink or Z shape when bent. If you are learning how to draw seabirds, understanding the role of humeral feathers will be an essential part of your game. On Cape Gannets, the humerals are white and the primaries and secondaries are black. Try to pick out the humerals in the slow motion sequences below.

When the wing is folded, the humerus (upper arm) and the radius and ulna (forearm) bend at the elbow to close like a book, the two surfaces of the underside of the wing touching. The wing then folds against the back so that the upper surface of the humerals lay against the back and are covered by the pile of the secondaries. The Short-tailed Albatross   is particularly helpful in studying humeral feathers because the secondary feathers on the upper side of the wing turn white proximal to the body, contrasting with the dark humeral feathers. Carefully examine the bird in the video below as it closes its wings. In this video the best view of the wing folding starts about twenty seconds into the film. Replay it several times until you understand how the wing folds.

Donate to Support My Work

Login to Your Account
Manage Cookie Consent
To provide the best experiences, we use technologies like cookies to store and/or access device information. Consenting to these technologies will allow us to process data such as browsing behavior or unique IDs on this site. Not consenting or withdrawing consent, may adversely affect certain features and functions.
Manage options Manage services Manage vendors Read more about these purposes
View preferences
{title} {title} {title}
Loading Comments...