There is a widely held belief that drawing is a gift. That some people are born drawers and that others are just out of luck and did not get the drawing gene. We often overhear people say, “I wish I could draw”. Perhaps you hear yourself say that too. In stark contrast to this belief is the experience that is repeated year after year is art classrooms and studios all around the world where people who say “I can’t even draw a straight line” throw themselves into it and discover that they can draw, and well, and that it gives them great pleasure to do so. Drawing is not a gift. It is a skill. A skill that we can all learn to a high degree of technical competency. The practice of this skill brings joy and deeper appreciation of life.

Many people stopped drawing somewhere in elementary school (usually around third grade). When we did, we watched the abilities of our peers who continued to draw improve around us. A few years later there is such a gap in the abilities of those who continued to develop the skill and those who had stopped that we look at the drawers as having a gift. This is psychologically easier to take. If you want to draw but don’t, you can just say “well, I was not born a drawer” and this gets us off the hook.

Here is the secret. It is just a matter of practice. The more you work at it, the better you will get. The improvement never stops. It is not a gift. It is not genetic. It is a matter of laying down proteins in your brain associated with this specific task. The same applies to playing a musical instrument, cooking, writing, or developing a sport. This is not an original idea on my part. In his book Outliers, Malcolm Gladwell discusses what it takes to make a master. It seems to be 10,000 hours (ten years) of practice and a supportive environment for your goals. See Gladwell’s website and a great UTube interview for more information.

I am nowhere near my 10,000 hour point but I see the influence of practice all the time in my own work. In 2003 I painted this American Coot for my field guide to the Sierra Nevada. At the time it was the best that I could do. It shows the identification features that I wanted to represent and I was happy with it.

In 2011 I repainted the American Coot for a field guide that I am working on of the birds of coastal California. I could have reused the first painting but after five more years of practice with thousands of new pictures I was a better artist and I was not satisfied with my previous work. Here is coot number two. 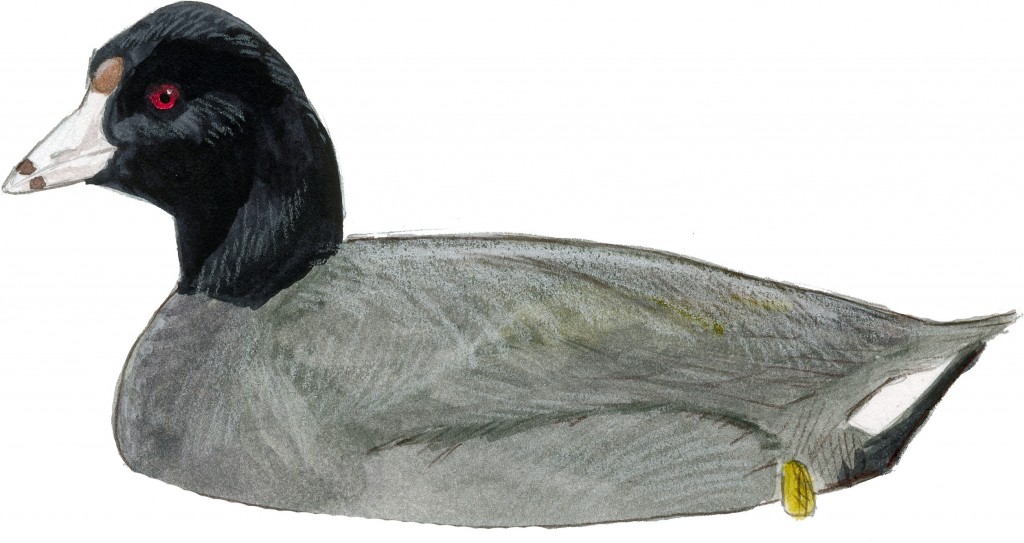 I think it is a better drawing. A few years from now I will be able to do even better than this. The point is- more practice makes better birds. The same is true in the development of any skill. Here is a similar set of illustrations of a female Ruddy Duck. This first one was drawn in 2003 and was used in Sierra Birds and The Laws Guide to the Sierra Nevada. It is OK, you can identify the bird perfectly well with this illustration.

This second Ruddy Duck was painted after more practice in 2011. It captures the feeling of the living duck more accurately and is arguably a better drawing. Both paintings took approximately the same amount of time to complete. 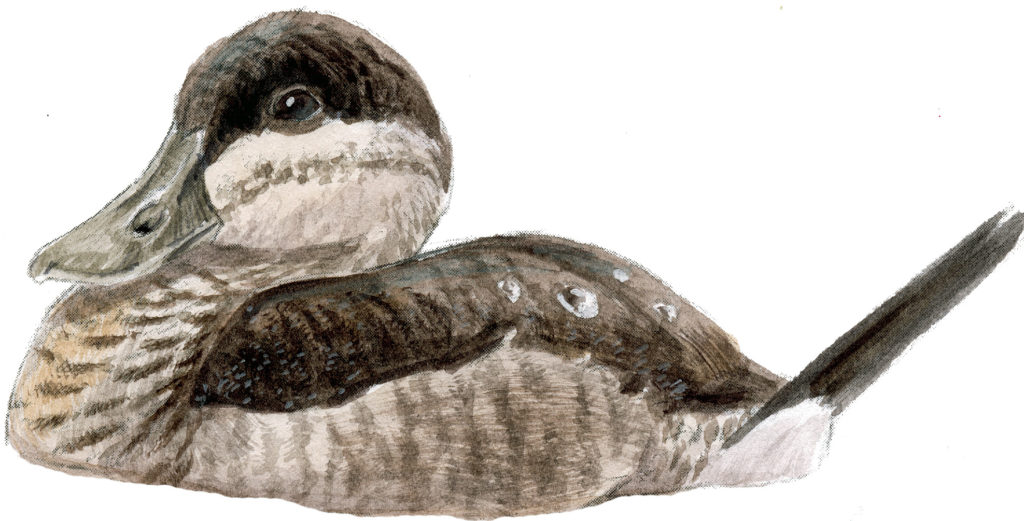 Have patience with yourself. Do not judge yourself prematurely by comparing the fruits of your work with that of others. Instead find your way to make drawing something that you can incorporate into your regular routines and something that you love to do. If you love it, you will keep doing it. The first year of throwing yourself into drawing is the most difficult. As you progress, you get increasing positive feedback from your work but in the first year this may be minimal. If you draw to make pretty pictures than you may become discouraged when one drawing does not meet your standards. People who are discouraged may quit. If you quit, you do not get better. instead, draw from nature to help you look more carefully. The process of drawing will help you notice details that you otherwise would have overlooked. Also drawing will help you remember what you have seen. So if a drawing helps you notice something or helps you remember it then the drawing is successful. This keeps you going.

As you progress, expect that there will be times that you feel stuck or blocked in your progress. This happens to everyone. The progress in developing a skill like this is a series of plateaus and breakthroughs. The point at which you will feel the most frustration is at the brink of the next breakthrough. Why? Because you can visualize what you can do at the next level but you are not there yet. In order to get there, you need to see it first so this is a good thing! A little more practice and you will be there. Then things will flow easily for awhile until you are at the brink of the next breakthrough. Then the frustration returns. When you fell the frustration, welcome it. It is a bell of mindfulness telling you that you are about to leap to the next level. Do not let the frustration make you put your pencils away

Take the time and decide what it is that you really would like to master then throw yourself into it. It is OK if drawing is not your thing. I would like to play the fiddle. I could if I did, but I don’t so I can’t. I have chosen to develop the art of seeing nature through the pages of my sketchbooks. Doing so gives me great pleasure, so I do it a lot and it is getting better.